Falling into a cavern, you are joined by similarly equipped heroes on a quest to slay the dragon waiting at the end. Each of you can hold only one item: a weapon, food, or gold. The items you choose to carry, use, or drop will determine your success at slaying the dragon and escaping the cavern.

[Down] or [S] to accelerate falls / pass through platform

A game for the Slow Game Jam. See the Dev Log for detailed updates.

Programming, HUD, and platforms by FlyingKatsu 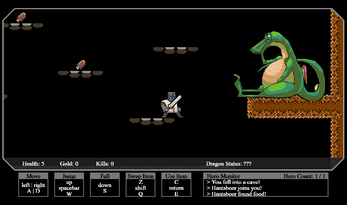